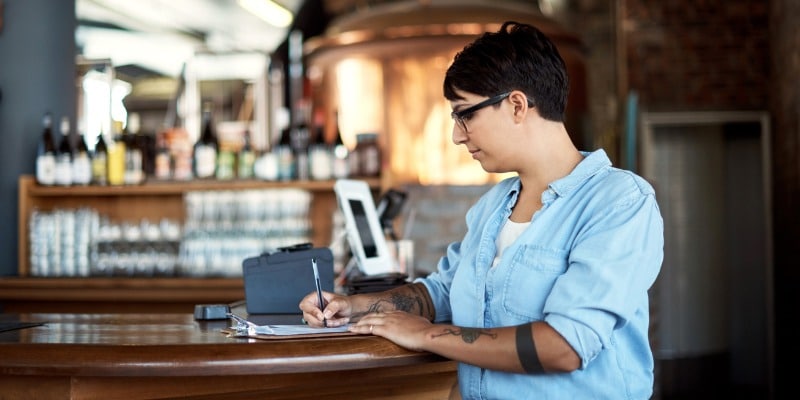 Managing your roster for profit

Effective rostering allows a manager to respond to the unpredictable nature of customer demand and impacts profitability more directly and immediately than any other aspect of operations.

Labour cost is one of the two most expensive manageable costs in your restaurant and café, but the only one that can be managed in real-time, in response to unpredictable fluctuations in revenue.

The impact of getting a roster wrong is considerable; too many staff and the cost of sales increases, productivity drops, and service is unproductive. Too few staff result in poor customer service, lost sales, and frustrated, overworked staff.

Effective rostering is the single most proactive means of achieving sustainable profitability. It can elevate a business above the 37% of food and beverage businesses that lost money in 2017-18, or the one in five that close their doors each year.

An effective roster can help you:

Controlling costs through effective rostering is a challenge; no two employees have the same skills, productivity, availability or desire to work the same number of hours, and customer demand fluctuates significantly across both the week, and seasonally throughout the year.

Is your roster performing?

A roster details when and in what role employees will work in the one to two weeks ahead. Its performance is measured through labour cost or wage cost percentage. This is calculated by adding up the wage cost of all the staff rostered that week (including salaried staff and any staff on annual leave) and dividing it by the revenue generated that week.

When we put together a roster, we calculate the value of that roster (including pension and provident fund contributions and worker’s compensations fees) and divide it by the anticipated revenue that will occur over that period. We then compare this to the actual week’s events: the revenue that was achieved, and the cost of staff servicing that revenue.

With a high-performing roster, labour costs should be:

Steve is new to management; he manages the 100-seat fine dining restaurant in South Africa. He has 23 staff on his roster and writes his rosters two weeks in advance.

Steve takes the typical industry approach of assuming that next week’s revenue will achieve the same revenue as the corresponding week last year. The second week of August in 2018 earned R36,000, and he assumes that the same week in 2019 will do the same.

He uses an excel spreadsheet to prepare the roster, and to roughly calculate wage costs. He estimates staffing costs will be around R14,000, but doesn’t worry too much about that. He created the roster according to how many staff he needs on each shift, which is the same every week, and the other numbers usually take care of themselves.

The wage cost of last week’s payroll was 36% (including add-ons), and Steve assumes that trade will pick up in line with last year’s result of R36,000, as it did the week before. But trade doesn’t pick up. Instead, revenue actually drops. To make things worse, Steve also hasn’t accounted for pension and provident fund contributions and workers compensation in his roster, so has underestimated what the true cost will be.

As a result, the 38.9% forecast labour cost jumps to 47% of the week’s revenue. The business loses R3,480 in just one week, and Steve and his rostering process are largely to blame.

What is labour cost percentage?

Labour cost percentage is the total cost of staffing your venue. It must include pension and provident fund contributions and worker’s compensation costs. It should also include accrued entitlements, such as annual leave.

You can calculate labour cost percentage as follows:

To predict the cost of your upcoming roster, use a similar calculation:

When we write a roster, it becomes a mostly fixed cost in anticipation of an uncertain revenue; we simply don’t know how much money we will take each day, each service or from each guest.

On average managers spend 4% more on rosters than they should; managers and owners often under estimate the amount of revenue in the week they write the roster for and spend more on labour than they should to meet that predicted increase in demand.

A 4% saving in labour cost has a significant impact on overall profit; for a typical restaurant it would mean a 110% increase, and the typical café would see a 120% increase.

But Steve made a larger error, common to managers and owners who use spreadsheets instead of rostering software. Steve didn’t accurately cost his roster or forecast his revenue. He forgot to plan for tasks that can be controlled, such as receiving a beverage order. And finally, Steve didn’t react to changes in revenue; the roster he had written in advance was different to the one he would have written in hindsight.

He hadn’t controlled the labour cost, nor met the customer demand; fewer customers dined in his restaurant, and his labour cost blew out, resulting in thousands of dollars lost in just one week.

How to manage labour costs?

Forecasting demand is a cornerstone of profitable rostering. Whilst a forecast is little more than an informed guess, it is much more effective than rostering without a forecast.

Forecasting involves two stages; firstly, reflecting upon what happened 12 months ago in the corresponding week last year. Was there something different about that week? A local event that drew customers away, poor weather, a public holiday, Easter or other special event? Was that week last year significantly different from the 4 weeks before it?

We take the average of the last 19 weeks revenue, per day, consider if any adjustment is necessary due to special events or the weather, and write a roster to the pre-determined labour cost target.

Define availability for staff; what days can and cannot be worked, are any staff unavailable over the rostering horizon, do staff have limitations as to the number of hours they can work, will salaried staff be rostered to work over-time, and understand regulations such as minimum duration required between two shifts.

A good rostering software package like Roubler will manage this on your behalf and provide feedback if you attempt to roster a staff member beyond their availability.

3. Schedule staff on the roster

Roster staff to a total cost no more than the target labour cost percentage value.

A great rostering software will include all the add-ons such as pension and provident fund contributions, will automatically cost in Public Holidays and penalty rates over the rostering horizon, has automatic award recognition for new staff, and staff with differing experience levels and determines an exact calculation of the roster.

4. Adjust the roster to real-time information

A roster revolves around an assumed customer demand, which is unpredictable. If the predicted daily revenue is not achieved, the roster must be revised. For example, Steve’s average Monday revenue is R3,500. He has four front-of-house staff, two chefs rostered, and a roster value of R1,400.

Tuesday morning Steve realises that Monday’s revenue was only R2,500, though the wage cost was R1,375.

The weeks revenue, even if the balance of the weeks predicted revenue is correct, will be R1000 lower than the revenue the roster was written to.

The best rostering software has automatic award recognition for new staff, and staff with differing experience, and a payroll function, which allows a manager to know exactly the cost of completed shifts, allowing the facilitating the adjustment in the roster across the balance of the week.

What is a good labour cost percentage?

Just what is considered a good labour cost percentage for a restaurant and café? The answer depends on the strategy employed by the business, and the segment it is in.

Steve manages a fine dining restaurant; it is licensed, and it is a table-service restaurant, and formal. Across its total menu, the restaurant has a food cost of 20%, and the wine list enjoys a mark-up of 220%. Table turns are slow, average spend is high, and the total business wage cost is over 30%. This is deceptive, because the kitchen wage cost is over 40%, which forces the front of house wage cost to be less than 30%.

Carmel’s café is a quick service café, where orders are taken at the counter, and menu items, like their enormous muffins, are bought in already made. Carmel’s food cost is higher, but she doesn’t have any kitchen staff, and the service required is much lower than in Steve’s restaurant. Carmel’s target labour cost is 25%.

24 steps to managing a roster profitably

Rostering is a fundamental role for a manager, and its complexity and impact on the business not only justifies but demands sophisticated rostering software with integrated payroll and automatic award recognition. Rostering software that costs a business R100 per month requires a labour saving of only four hours to make the software cost neutral. But using a powerful rostering solution like Roubler provides an opportunity to not only save time, and save money, but to actually provide the business with a tool that improves the profitability of the restaurant or café. The business can make more money when partnering with Roubler than not. And no restaurant or café can ignore that.