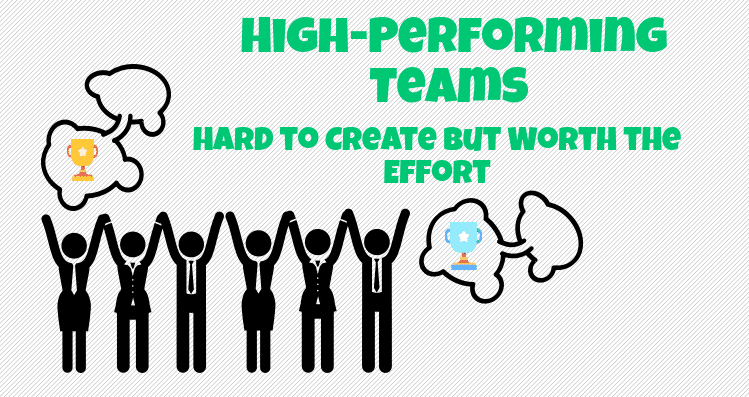 High-Performing Teams: Hard to Create But Worth the Effort

High-performing teams have endless benefits. Investors will care more about your start-up if the team works well together. If a team is cohesive, they can have increased financial gains, and work better than any one person on their own.

This is why the idea of teamwork is so important. In university, there are endless group projects focusing on your ability to work together as a group. When you go for your first job, often a question will arise about your ability to work in a team. Wherever you go, teamwork will inevitably remain a part of your life.

Technology is expanding into the workforce, with more people working from home. However, teamwork remains paramount to a successful business. Furthermore, teams that can work alongside technology stand a better chance of excelling in their field.

The make-up of your team

How your team is built is very important. A high-performing team precariously balances size and politics. A team with less than six members runs the risk of a scarcity of opinions. Since there are so few people, there isn’t a range of ideas to choose from. In addition, competition can affect the team’s cohesiveness if there is talk of promotions in a group so small.

Contrastingly, research suggests teams larger than ten people in size tend to become less successful. People tend to form clusters of smaller teams, and there may be some jockeying for power.

When building high-performing teams, CEOs need to ensure their members have the right skills for the job. Each person should be dedicated to the task. Some people may shine individually, but in a group environment they become destructive. If you have to cut them loose for the sake of the team, even if you step on some toes, it’s necessary for success.

Sometimes organisations are too large to follow the ten or less rule for members. When this happens, it’s important to delegate to form sub-teams. People may be members of more than one team. However, as long as they report to the next level up, you can maintain a degree of organisation.

Software to track worker progress allows CEOs and managers to keep track of team progress. If an employee is succeeding individually they will be ranked highly on Roubler’s workforce analytics. This could help you find an ideal candidate for a team.

A well-built team has more than just competent members. In a design challenge introduced by Peter Skillman, teams must build the tallest freestanding structure they can from 20 sticks of spaghetti, some tape, string, and a marshmallow on top. Tom Wujec found that teams of CEOs performed significantly better when an executive admin was on the team. This is because teams benefit from facilitation.

Furthermore, they benefit from a shared goal. McKinsey and Company found three important features required for a well-built team. The first is an agreement on what the team is aiming towards and how they will get there. Secondly, the team should be able to communicate easily, whether that is in agreement or conflict. Finally, the team should feel they are inspired.  The environment should stimulate risk-taking and new ideas.

You should start by understanding how well your team conforms to the aforementioned features. This could be through discussion, surveys, or observation from outsiders invested in the team’s success.

When creating your team you have to decide where to start. Often teams begin with workshops away from the office. This allows the team to make real business decisions, and then pause to reflect on how they worked together. This tactic is often used in tandem with experience in the job.

Team members in unsuccessful teams often believe meetings take up too much of their time. In truth, the content is the problem. Meetings should not be discussing topics that could be handled externally. Focus instead on strategy, how to use resources, and how to create a smooth interaction between teams.

Reflective sessions during the workshops can be beneficial in teasing out underlying issues. These discuss not the problem itself, but how the team tackled it. Talking through this can help everyone understand their behaviours. If these behaviours are affecting others, steps can be put in place to change them.

Back at the office, it’s important to keep tracking progress to ensure that people are still aligned to the goal. One team that believed they were striving towards the company’s goals could barely remember what they were when asked to list them. If productivity is decreasing on software such as Roubler’s workforce performance tracker, it’s important to chat to the team member. Discussion can help realign a team to the right direction.

There is no easy or quick way to form high-performing teams. People that seemed sure fits for the job may work poorly with others. Some that worked well at the start may lose motivation as the task continues. As such, it’s important to keep going back to off-site workshops and reflective sessions. You can track the progress of each team member, and those who are holding the team back may have to be moved elsewhere. But if you are willing to put in the hard work, and follow the facts, the benefits of a well-built team truly are endless.

For people in management positions, successfully building and engaging your team is the foundation upon which all other …

Talent management, hiring, and training, is expensive. Replacing just one salesperson can cost your business up to $90,000. …