The Digital Workplace: How Are Our Work Habits Changing?

With the rise of new technology, the way we work is changing. The idea of working in an office, arriving at 9 and clocking out at 5, is becoming less common. With a mobile and WiFi, even on the other side of the world, your boss and colleagues are never more than an email away. The digital workplace seems to be becoming a smarter choice.

People can find work in a place they have never even set foot in. Often, as long as the work is being completed, it doesn’t matter where it is being completed from. You could be sitting in a hotel in Greece completing your spreadsheet for tomorrow’s video meeting in Brisbane. It could be 3am, and the baby is up, so you’re getting a head start on tomorrow’s tasks.

Is the traditional working week – getting up, getting dressed, commuting and sitting at a desk from 9 to 5 – becoming obsolete? The McKinsey Global Institute talked to experts in the fields of academia and business industries. They discussed how our workplaces and the way we work is changing, shifting towards a decentralised digital workplace. 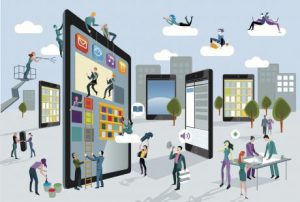 A digital workplace is more flexible, more conducive to productivity

Carl Camden, former CEO of Kelly Services, doesn’t think the 9-to-5 work style is built to last. He sees it as a “nice experiment,” but not something that necessarily applies to today’s workforce.

He may be right. Digital platforms such as Roubler are available through mobile devices, allowing a shift away from office-centred work. People can take their work wherever they go because it isn’t linked to a desktop in an office that shuts at 6pm. If you have an idea for your job, you can act on it immediately. If you need a workforce organised and recruited now, you can immediately start assessing candidates without waiting until business opens at 9am.

Susan Lund of MGI sees things in a similar way, although she does not think it will disappear entirely. Work will become more variable, and the jobs that may require a 9-to-5 workday may be contracted out to freelancers. To her, that does not seem so different to what is already occurring in workplaces across the US.

What people may find in the future is many of the data entry or monotonous positions in today’s 9-to-5 workplace will be contracted out, but to machines and artificial intelligence. Roubler removes the need for human relations employees to waste their time on payroll or timesheets.

Michael Chui, also of MGI suggested that this kind of 9-5 is a remnant of the industrial age. With technology, this may change to allow more diverse work opportunities.

For people who have children, or other commitments, this will allow them to work just as hard, or harder, around the times that suit them. Studies have found that night owls generally have a higher IQ. While the good news is that night owls can adapt to a 9-to-5, they have untapped potential in that they are far more mentally alert than early birds for a longer time after they wake up.

The digital workplace, powered by cloud software and online platforms, is expanding possibilities. In a 9-to-5 structured system, an employee has to be at work for the length of the day, regardless of how much they achieve. There is no incentive to get the work done any faster. Whereas for some employees, digital platforms allow them to complete work quickly and efficiently, in the time when it is comfortable for them.

Stephane Kasriel, CEO of Upwork, is enamoured with the way things are changing.  Technology has paved the way for virtual reality. Conferences are held across great distances where nobody is in the same place. He believes tools like these are enabling the move away from 9-to-5. He sees it as a way of staying close to your community, rather than having to move to where the work is. This way, people can live wherever they want, while still having the job they love.

But the shift to a fully digital workplace is not here yet. Katherine Fleming of NYU thinks it will be a slow move. For some people, a foray into the digital workplace could be as simple as implementing a cloud-based HR software.

Fleming notes that people like to be around other people. Moving out of the workplace and into your homes takes away some socialising opportunities. But often, it will create others. Being able to work from anywhere in the world, allows you to go out and have experiences that would otherwise be restricted by location. It could help you be close to family that are otherwise too remote to visit. It creates many new opportunities.