The Future of Employment as Created by Artificial Intelligence 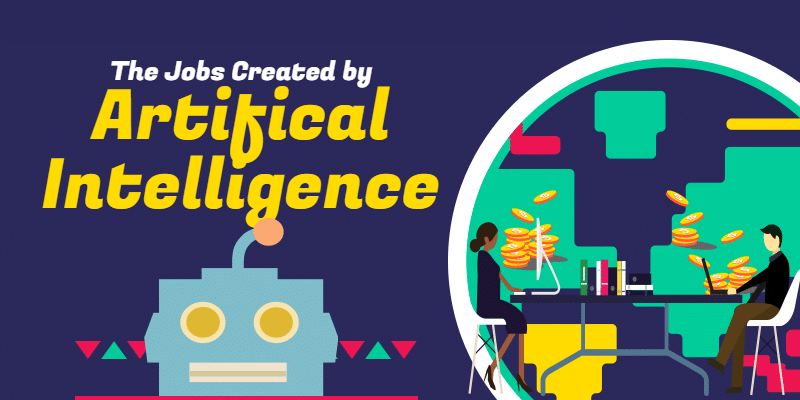 The Employment Created by Artificial Intelligence

Automation, and artificial intelligence, has reconfigured the workplace forever. This has been going on for a very long time. The loom took away hand-made fabrics. Tractors removed the need for people to plough the fields. Factories for everything from cars to shoes removed manual labour in those areas. With this next wave of automation, even more jobs seem set to become obsolete.

However, we shouldn’t see this as a morbid for the future of employment.

What is often overlooked in this dystopian view of the future, is the jobs that will be created in place of those lost. When ATMs were introduced, people assumed that the age of the bank teller was over. But in fact, the number of bank tellers has increased. Since they were freed up from menial tasks, banks had the ability to open more branches and employ more tellers to talk to customers.

But Artificial Intelligence (AI) will change the kinds of jobs we will work. A study by Accenture PLC found that in the place of machine operated positions; there will be a wave of new jobs. These jobs will allow employees to use skills unique to their personalities, and are completely novel to the workplace.

MIT Sloan labels the three categories of the new jobs robust to changes in technology. These will complement artificial intelligence, working alongside it in the new workplace.

The category of trainers refers to the people working with Artificial Intelligence machines, teaching them how to understand at one end, and react at the other. Human communication is difficult to comprehend. Often we will say one thing, and mean something entirely other. These trainers will help AI understand complex interactions. Possible roles include customer-language tone and meaning trainer, smart-machine interaction modeler, and worldview trainer. Jobs like empathy trainers may not even require a degree – these kinds of professions may require instead innate skills that can be honed through a training program.

MIT Sloan explains how Yahoo Inc. has created an algorithm that detects sarcasm online with around 80% accuracy. The goal is to correct a machine when it responds inappropriately, so that over time, the machine can react to a situation with as much knowledge, empathy, or humour is required.

Explainers will help close the gap between business leaders and technologists. Often, many business professionals aren’t as savvy with the intricacies of AI, and explainers will assist in demystifying what goes on inside these technologies. As people come to rely on AI mechanisms to make decisions, there needs to be transparency on how the decision was achieved.

This is where explainers come in – they make complex processes appear simple to the everyday customer. In this way, their skillset is highly trained but also highly specialised. Just as a doctor would need to explain their reasons for performing a surgery, a team of explainers will need to be available to bridge the gap between technology and its customers. “Explainers” will need a complex knowledge of the way a machine’s decision-making process works. This could be a simple decision tree, or something more complicated like machine-learning bots. In each case, an explainer should be able to make the complex sound simple. This way, there is trust built in the machine, and the customer understands what is happening. Possible roles include context designer, transparency analyst and usefulness strategist. At each level, these roles will assist businesses is understanding which kind of AI will better their goals.

Finally, the last category of job created by artificial intelligence is that of a ‘sustainer’. Future employees in these roles will manage the fairness of AI systems, and ensure that any algorithm is working seamlessly. This role will continually update and monitor AI technologies, ensuring they operate fairly and morally. Roles may include the automation ethicist, automation economist and machine relations manager (MRM). The ethicist would intervene if a machine was shown to exhibit racial or geographic biases. They would identify where the issue is and why it had occurred with an algorithm forensics analyst. They would have to be adept at recognizing violations, but also how they have occurred. This would hopefully fix the issue and ensure it did not reoccur. The economist would evaluate the cost associated with poor AI performance, and the MRM would examine algorithms to promote and demote the best ones for different businesses and contexts.

The future of technology is fast changing, and the challenges with how we interact are demanding more and more of our human skills. AI is now an essential part of the workforce, but several new roles are emerging in order to ensure the best outcomes.