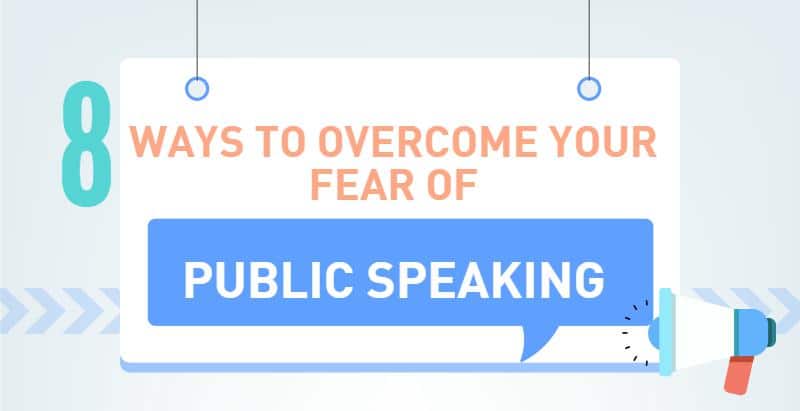 8 Ways to overcome your fear of public speaking

We’ve all heard the advice: imagine your audience in their underwear. Apart from being a little disturbing, there are far better ways to help you feel more confident while public speaking.

Practice makes perfect, especially when ti comes to public speaking. John Travolta’s infamous Oscars mishap of misnaming Idina Menzel “Adele Dazeem” could have been avoided by simply reading through his cards aloud a few times beforehand. You need to know your stuff back to front. You should be so good that if someone asked you to explain the gist of your speech to them it would be as fluent as the speech itself. As they say: “Don’t practice until you get it right. Practice until you can’t get it wrong.”

2. Prepare for the worst

It’s very important to read the speech until you know it word for word. However, the room you’re speaking in is never going to be the perfectly controlled environment of your bedroom mirror. A kid at the back could start screaming, the projector could cut out, you could drop every single one of your palm cards. That’s the point where you swear a little under your breath, and hopefully, continue on. The worst thing you can do is get flustered and forget, so it’s good to be prepared. Try practicing with ITunes playing on shuffle, with a loud song queued to come up at an unknown point, or drop your notes, pick them up, and find your place again. Practice while playing tug of war with your dog; explain the speech to your next-door neighbour. Understand the speech beyond what it looks like in your mirror, and know that if the worst happens, you can pick up, and keep going.

It’s not the Oscars, (or if it is, congratulations), it’s you explaining your message to another person. The audience isn’t listening as a group; they’re listening as individual people. Your speech isn’t some big performance; it’s you chatting about something important enough for you to speak about. As you flick through the crowd, look people in the eye as if you’re talking to just them. It will be easier.

Up to 90% of human communication is non-verbal. This means the message you’re getting from the audience is not coming from what they’re saying. It’s coming from their facial expressions and their body language. This becomes an issue when you’re public speaking and signals are misconstrued. Learn that an audience sees themselves as a mass, and will often not display encouraging visual cues such as smiling or leaning forward when listening to speeches. This means you could worry the audience isn’t interested because they’re not focusing on your face or leaning back, but really they are intent on your words. What’s more, if a person is yawning or falling asleep, they probably spent all night up with a crying child or got up early to watch Game of Thrones. It’s not you.

5. Focus on the positives

While you should prepare for losing your spot or mispronouncing the boss’s name by practicing, that’s not what you should be thinking about before the speech. Don’t think, “what happens if I flounder up there,” think “what happens if I’m perfect?” This leads to far more positive associations. What’s more, do you remember the last time you watched someone speak in front of a group of people? You probably can’t pinpoint an exact occasion. That’s because good or bad, no one is going to remember if you were nervous or stumbled over a few words.

When people watch a speaker walk confidently into a room, they won’t know your palms are sweating and you’re starting to get tunnel vision. Similarly, they’ve got no vested interest in seeing you fail. They’ve come to see a speech. Expectation theory states people are far more likely to see what they expect or want to see. If your body language is saying you’re confident, the audience will only see a speech deliverer public speaking confidently.

7. Think about what you’re saying

The focus of your speech is not the people you’re presenting to, but what you’re saying. If you want to avoid being worried about the audience, don’t think about them; think about the speech itself. Examine the intricacies of it. Congratulate yourself on word choice. Think of how you’re going to say the next sentence, not how the people will receive it.

8. Keep getting up there