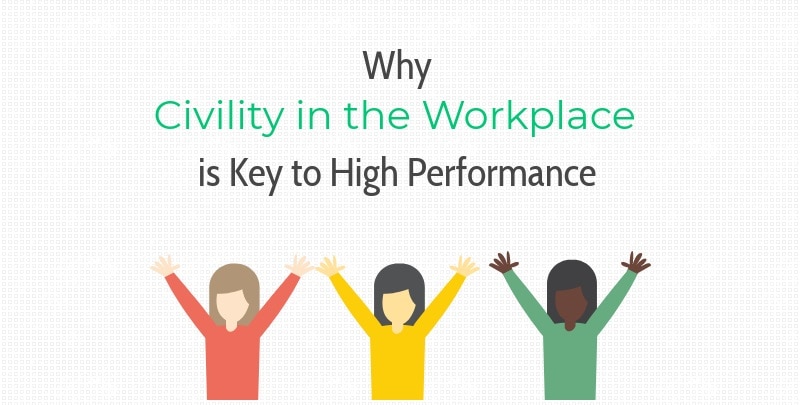 Why Civility in the Workplace is Key to High Performance

There are many obvious behaviours that can negatively impact the morale and culture of a workplace. These could include racism, sexism, bullying, or discrimination, among many others. However, even small uncivil behaviours can have a significant impact on how the team dynamic functions – and impact the bottom line. Research published in the Organisational Dynamics journal used data from more than 9000 people to attempt to measure the costs of uncivil behaviours.

What is incivility in the workplace?

Uncivil behaviours tend to be poor habits that are seemingly inconsequential, often coming from thoughtlessness rather than malice. These could include exclusion of some staff from team conversations, abrasive or abrupt emails, texting during meetings, lateness, swearing, avoiding difficult tasks, or not listening to colleagues. Identifying the negative impacts these behaviours have can be difficult. The intent to harm others is not obvious, (compared to say, bullying behaviour) and policies to combat them can often be seen as trivial or arbitrary.

The impact of incivility on the business

The Harvard Business Review outlines the stark impact of incivility in the workplace. A poll of 800 managers and employees across 17 industries shows the extent to which bad behaviours affect those on the receiving end.

These changes in work practices have a rapid domino effect into other functions of the business. Research from the University of Southern California found the impact on customer and stakeholder relationships can be staggering. When third parties are exposed to even a single incident of incivility, generalisations are made about other employees, management, and the brand itself. Uber is a notable example of this, where incivility among executives severely impacted the brand and can have a lasting impact on public perception.

Creativity and innovation can also be impeded by a lack of civility in the workplace. Employees who feel their work is not valued, or they aren’t being listened to are less likely to make efforts to find new or more efficient ways to complete tasks. More importantly, employees may not even know this drop in creativity has occurred. Psychologists explain that creativity relies on retrieving knowledge from long-term memory and combining it with short-term working memory for the task-at-hand. Where bad behaviours occur, they create a distraction and steal mental resources and attention that are normally used for innovation and inventiveness.

Civility in the workplace fosters positive collaboration within and between teams. Annoying workplace habits quickly generate information silos where staff avoid colleagues who irritate them. As many as 20 per cent of people refuse to work with people who have been uncivil in the workplace, even if they are direct teammates. Research conducted within Google showed that high-performing teams have one thing in common – psychological safety. Psychological safety is both fragile, and critical to success. It is the belief that a particular team is a safe environment to take risks and experience failure without criticism. Uncivil behaviours reduce this feeling, and collaborative behaviours diminish.

Improving civility in the workplace

Creating policies for civility in the workplace, such as courtesy or basic politeness, should be unnecessary for a business. Managers can implement different strategies however, to foster a culture that makes good behaviour an innate, effortless pattern for all employees.

Primarily, civility starts at the top. All senior staff should lead by example when it comes to exhibiting positive interpersonal behaviours. This includes genuinely listening to employee feedback, following up on requests, and acknowledging staff who do well. It also means providing feedback to employees who may be uncivil in workplace situations and having an open dialogue about ways to address any issues.

There should also be open lines of communication for staff to bring suggestions to management, including feedback on the operations of the business and different workflows. This should also flow through to the recruitment process, where candidates are evaluated not just for job skills, but also screening for interpersonal behaviours. These may come from questions asked of referees, or even including existing staff in recruiting the best fit for the workplace.

Building the right workplace culture is critical for success and is built from new recruits, all the way through to the C-suite. Incivility in the workplace is too dangerous to ignore.