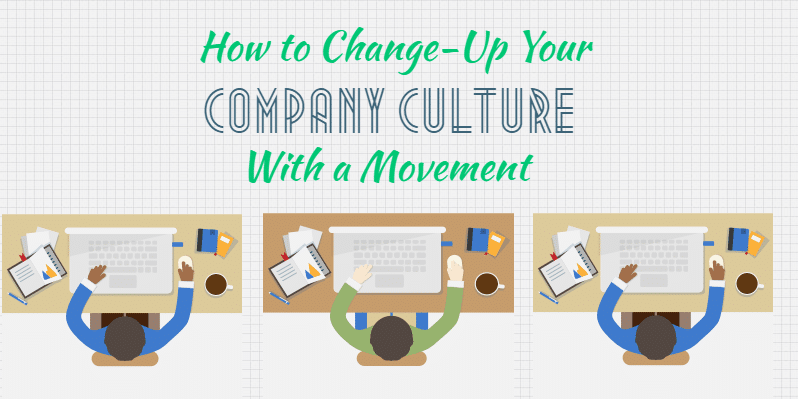 How to Change-Up Your Company Culture with a Movement

Culture is intangible. Every time you think you’ve nailed down what it is, it becomes something else. If your company culture is rigid and hard-line, making it into something more free flowing and creative can be a difficult change. Initiating this shift can’t be accomplished through an order. You can’t tell someone to be more creative, more altruistic, or innovative. The most powerful way to create company culture change is to change the way people think. While it seems simplistic to quote the Little Engine that Could – “I think I can, I think I can, I think I can,” the first step to changing company culture is the people within the culture.

Changing company culture with a movement

G.V. Prasad is the CEO of worldwide pharmaceutical business Dr. Reddy’s. It is the creator of inexpensive medication. As such a big business, it had implemented lots of procedures across its 27 countries and 20,000 employees. However, as time passed, these procedures grew convoluted and cumbersome.

To change this, Prasad knew he had to act from within the company to inspire employees to the same purpose. By researching and talking to each person involved in the company, from scientists to workers on the floor, they came up with a company ideal: “Good health can’t wait.”

Prasad’s leadership team could have simply announced the change – “We are now working under this slogan.” However what they did was far quieter, and far more clever. They undertook the very essence of leading by example. Prasad’s team knew that changing company culture wasn’t a case of tell and do. The team let the new slogan gently influence how they made choices.

They worked towards showing how this idea worked, instead of telling people about it. The team worked towards user-friendlier packaging. They shifted Russian sales representatives to be rebranded as knowledge bases for doctors. They moved towards a more integrated internal data platform. This platform was used how many companies utilise automation tools – to help solve customer problems faster and more efficiently.

Finally, after changes were beginning to be felt, they announced their new idea – “good health can’t wait,” to their employees. The next day, they announced it to the world. They created “innovation studios” to further encourage creativity. Prasad claims the company culture change was almost immediate. Scientists brought products to market quicker, and taught these lessons to others.

How to identify a movement

Changing company culture with a movement requires thought. A movement or culture shift often seems like it starts with a strong leader, someone rallying the troops. And while strong leaders are important, research suggests movements come from a base of emotion. A general unhappiness with the way things are can expand into a small group of people who care. From there, their victories can grow, and with each person seeing them succeeding, their movement expands. Movements that succeed find the influence of current social influencers and leaders, who help create change at a formal, structural level.

How do you lead a cultural change?

While a leader may not be the first person to incite a movement, their influence can flare up emotions if used correctly. Leaders need to stir up passions, making people feel an inextinguishable desire to create change. This is seen in Dr. Reddy’s change through “good health can’t wait.” They are creating a call that asks employees to look beyond themselves for the good of others.

Movements always appreciate the little victories. To inspire people, it is important to show that your movement is working. Those who are sitting on the fence may become motivated by proof that they will be on the right side.

It is very easy to shout out your hopes for the future of your movement or company. But for employees, this can be seen as a far off end goal that may or may not be attainable. A far better approach is to highlight and appreciate the successes or actions that are already achieving that goal. This way, employees can see the direction the company wants to take in action.

If such successes or actions don’t yet exist, it is the job of leadership to create these projects as a way of stimulating cultural change. Additionally, movement creators are able to bring in individual groups that would not normally work together. If you can inspire them under a single banner, you can create a diverse work-base.

Leadership doesn’t start with a room of CEOs hiding away their designs on the company. Instead, Dr. Reddy’s engaged members across the organisation to find out what people needed from the company, and how they could inspire them. They asked members to define what the new slogan meant to them.

When the time came to make the movement public, Dr. Reddy’s created a brand identity that worked alongside the change. Movement makers sometimes create logos or merchandise that makes people feel like they belong to something. In a way, they create a space, physical or not, that people can identify as their own.

Enterprise leaders and when they should use their power

A movement maker can often start from the bottom and work their way up, inspiring people along the way until they have the attention of a whole body of people. An enterprise leader already has power. They are in a leadership position. And while they do have the ability to order change, when making changes to company culture, they should pick their moments.

Changing company culture requires the right balance between norm, and everything that could be achieved. A little bit of friction is good. A lot can be detrimental to your company. So assess the situation, and encourage opportunities for people to take action. Start small. And if a push is needed, you have the tools to do so.

Looking to use HR technology to implement a better company culture for you workplace? Roubler can help. Streamline data entry and keep track of all your employee’s achievements and accomplishments with our business intelligence. Keep all of your employees up to date with what’s going on through the app. Find out more here.